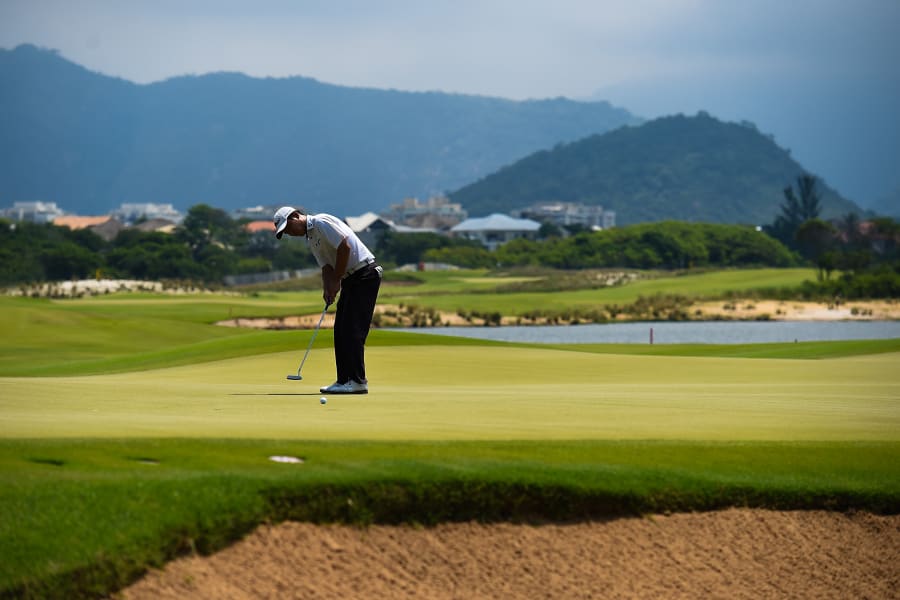 Brazil has 125 golf courses — an amount that may seem paltry compared to the 15,000-plus greens in the United States. Why does Brazil lay claim to so few greens? Golf is considered an extremely elite sport in Brazil and is played mainly by those who can afford pricey memberships to private country clubs. But thanks to the recent Olympic Games in Rio de Janeiro, golf has moved one step closer to becoming an accessible sport for Brazilians and tourists alike.

The city now boasts three professional-level 18-hole courses, but only the Olympic Golf Course is open to the public. Rio de Janeiro’s potential to become a top golf destination led Dutch expat Jasper Veelenturf to start Riolize Golf, a tour company specializing in golf-focused travel experiences. In the last year, he’s played and toured more than a 20 golf courses across Brazil. His verdict? “Rio de Janeiro has three of the top five courses in the country,” Veelenturf says.

The par-71 Olympic Golf Course opened to the public in October 2016, becoming the only public golf course within Rio de Janeiro’s city limits. Golf returned to the Olympic Games last summer after a 100-year absence, and this course was christened by legendary golf pros like Justin Rose and Inbee Park, winners of Olympic Gold in 2016. Physically the course is similar to Australian sandbelt courses. It is rustic, dotted with natural vegetation, and golfers regularly see wildlife like alligators, owls and capybaras.

The course is building a restaurant, professional golf shop and driving range that will be ready in 2017. Until then, stop at Barra Shopping Mall for diverse dining options on the way back toward the city. “We were one of the first people to play the course after the Olympics in October,” Veelenturf said. “We felt it was like a privilege.”

Itanhangá Golf Club may not be Rio’s most prestigious golf club, but it makes up for that in size, historical prestige and tradition. Former Brazilian President Getúlio Vargas played golf almost every weekend at the Itanhangá golf course in the 1930s, choosing it over the more physically taxing Gávea Course. Its 27-hole green consists of two courses, a traditional 18-hole, 72-par championship course and a 9-hole practice course.

Flat rolling greens dotted with tropical trees flank the course, and players have an amazing view of Pedra de Gávea — the world’s largest monolith mountain located on a coastline. The course has hosted PGA and LGPA tour events. “It’s the least special of Rio’s three golf clubs,” says Veelenturf. “But it’s also the most traditional course.”

The Most Prestigious: Gávea Golf and Country Club

A yearly membership to Rio de Janeiro’s oldest and most prestigious golf and country club is steep, costing more than $3,000 a year. Those high fees guarantee its members — and visitors — the most well-kept greens in Rio. Gávea Golf and Country Club is private, but the right friends or a low golf handicap will help you score some pricey rounds at the 69-par course. This is the closest golf course to Rio de Janeiro’s tourist-friendly neighborhoods of Copacabana and Ipanema, and it sits between Tijuca National Park and São Conrado beach, leaving players with unforgettable views of the ocean and shoreline. All players need to do is show up (in golf attire) and everything from food to golf clubs is available at the club. “They take really good care of the course there, and the people truly take care of you,” Veelenturf said.

The golf caddies who work at the Itanhangá and Gaveá courses often spend their days off honing their skills at this 9-hole course located in a less affluent suburb outside of Rio de Janeiro. The club’s origin story is a good one. In the late 1990s, a golf caddie, Jair Medeiros, did not have playing privileges at the Gaveá Golf Club where he worked. To play, he decided to improvise. He and his caddie friends started hitting balls with wooden drivers on private pastureland in his hometown, Japeri.

The perseverance of the caddies eventually caught the eye of local leaders and well-connected golf officials: The 70-hectare Japeri Golf Course became the first public golf course in Brazil when it opened in 2005. A round of golf cost less than $20 on weekends. Today, more than 100 local elementary and high school students train at this golf course, which is located less than an hour from the center of Rio.

Get in touch with us